The Definition of Social media

The Growth and Impact of Social Media on Society and Business:

Controversially, Friendster emerged as the first social media in 2002. It was launched as a social networking website to connect users by friends of friends. Although people used it to make new friends for dating; it has become a gaming site in Malaysia since 2015. In 2003, LinkedIn has introduced itself as for professional networking site. It brought a great opportunity for job seekers to post their CVs as well as employers. However, it is estimated that around 300 million people are using this platform regularly.  After that, Flickr came up with an image and video sharing service in 2004. The professional photographers and amateurs use this platform for uploading photo and video with high resolution.

Undoubtedly Facebook has become the leader amid all Social Media revolution because of a huge number of users; it began its journey in 2004. Mark Zuckerberg also a student at Harvard University created this social networking medium and opened it publicly in 2006. Another famous social media platform name is YouTube that was created in 2005 and Google purchased it in 2006. It is one of the popular social media to share video personally and commercially.  Twitter is an American news sharing and social networking service company that was founded in 2006. Users can post information and photos and communicate with messages also known as “tweets”. It is a very popular site for politicians and celebrities.

A list of the 13 Social media with a Foundation date

The Importance of Social Media

Social media are also known as the new media these have become an indispensable part of modern lifestyle. According to Statista (2019), there are around 800 social media that are being used by their respective users such as Facebook, TikTok, WhatsApp, Viber, Instagram, WeChat, Google+, Pinterest, LinkedIn, VK, and so on. They also mentioned that the total users of social media are around 3.0 billion all over the world, and Facebook become one of the most famous social media that has managed to gain 2.30 billion monthly active users. Nobody can deny the blessing of social media to make our civil life easier from the perspective of communication with each other beyond the country’s boundary. Social media joint with technology has improved the communication process broadly although there are both advantages and disadvantages of Social Media on individuals and companies.

Advantages of Social Media on Individual and Company

Nowadays more than 90 percent of teenagers are using smartphones and in the meantime, 45 percent of them surfing the internet every day. People are being benefited individually from several viewpoints when using social media such as education, communication, workplace, marketing, entertainment, and so on. Everybody has to acknowledge that Google has become the lecturer for every student who is seeking knowledge from the internet by using the Google search engine. Apart from that, Social media have become the best option for imparting and sharing knowledge. We can easily perceive how difficult education educational life would be without using social media such as Facebook, WhatsApp, Instagram, and so on. Learning and teaching system have been integrated with social media closely. Social media are the best grace of technologies from the perspective of education and communication.

Additionally, social media have a great positive impact on the company or organization from the perspective of business and marketing policy. Social media help us not only for communicating with each other, but it is also beneficial for the company such as corporate branding, product branding, social media marketing, paid marketing, enhancing the website traffic, promote content, and so on. Selling products and services online has been easier for the blessing of social media.

Disadvantages of Social Media on Individual and Company

Apart from personal issues, social media can destroy the business in many ways such as the harmful negative review of customers, brand image depends on employees, high customer expectations, and reduction of employee productivity, company reputation depends on social media, and so on. Some organizations are experiencing several disadvantages for social media revolutions.

In short, Social media have both positive and negative impacts on Individual and Company. People are getting benefits when using social media in the aspect of education, communication, workplace, marketing, and so on. In contrast, some crimes are happening due to social media such as cybersecurity, cyberbullying, hacking, and so on. Many companies expanded their business through the positive impact of social media where some organizations have confronted obstacles because of them. However, social media can a blessing for both individuals and companies if we use them properly.

1. What is Symbolic Convergence Theory?

According to Symbolic Convergence Theory,  People share common fantasies and visions and these collections of individuals are merged into a cohesive group. SCT presents an explanation for the appearance of a group’s cohesiveness, consisting of shared emotions, motives, and meanings. Symbolic Convergence Theory consists of three words such as symbolic, convergence, and theory. Group members cooperatively create and sustain a shared consciousness including shared meaning through interaction.

Symbolic is serving as a symbol that represents or expresses something else such as an idea, an action, quality without using words such as Code Words, Phrases, Slogans, and Gestures.

Code Words: What does FF: AC stands for?

Slogans: Think different is an advertising slogan used from 1997 to 2002 by Apple Computer, Inc.

Gestures: The common thumb up sign represents something approved and accepted. 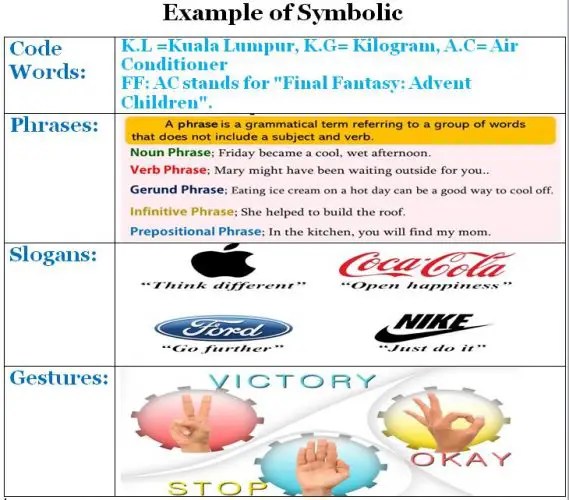 Convergence means forming a new unified whole or evolving into one through coming together two or more things. Convergence comes from the prefix con- and verb verge. Here, prefix con means together, and the verb verge, that means to turn toward. We can use convergence to explain things that are in the process of coming together, like the slow convergence of your opinions with those of your mother, or for things that have already come together. For example, a crowd of mass people all move together into a group.

Theory is a set of principles on which the practice of an activity is based. It is a formal concept or set of ideas that is aimed to explain something. For example, the Tw0-step flow of communication theory, Groupthink Muted Group Theory, SOCIAL IDENTITY THEORY,  Tubb’s Theory- Small Group Communication, and so on.

2. History of the Symbolic Convergence Theory?

Ernest Bormann established Symbolic Convergence Theory in 1972. SCT was first proposed by Ernest Bormann in the Quarterly Journal of Speech in 1972. Bormann and his colleagues at the University of Minnesota introduced SCT as a framework for discovering, describing, and explaining the dynamic process by which humans come to share symbolic reality.

SCT is a communication-related theory introduced by Ernest Bormann who is a Professor at the University of Minnesota in the United States. American communication theorist best known as the originator of symbolic convergence theory (SCT) and its attendant method, fantasy theme analysis, which both explore how the sharing of narratives or “fantasies” can create and sustain group consciousness.  He argued that group consciousness can occur at any level of communication, from within small groups to mass media. Thus, he identified symbolic convergence as a general theory of communication.

Symbolic Convergence Theory offers an elucidation for the appearance of a group’s cohesiveness, consisting of shared emotions, motives, and meanings. Through SCT, members of the group can build a community or a group consciousness which grows stronger if they share a cluster of fantasy themes. Although this theory allows theorists and practitioners to anticipate or predict what did happen and what will happen but it does not allow for control of human communication.

It attempts to explain how communication can create and sustain group consciousness through the sharing of narratives or fantasies. To foster this cohesiveness, dramatizing or using fantasy stories are significant types of communication involved in SCT. SCT explains that meanings, emotions, values, and motives for action are in the communication contexts by people trying to make sense out of a common experience. It is a process through which collectives create and share a consciousness and develop a common symbolic reality.

END_OF_DOCUMENT_TOKEN_TO_BE_REPLACED

Bruce Tuckman introduced his group and team development model in 1965. In the 1970s, he added the fifth stage adjourning to his model. According to Tuckman’s model, the five stages are Forming, Storming, Norming, Performing, and Adjourning. It is one of the appropriate theories for explaining the behavior of group members with dynamic characteristics. A perfect theory to describe how to group and team members adjust and adapt in a group.

Primary Tension of the forming stage

Advantages of Tuckman’s Theory or Model

Disadvantages of Tuckman’s Theory or Model