What are the natural causes of climate change?

The Nine Natural Causes of Climate Change are:

Causes of Climate Change Diagram in 2022

The most significant natural cause of climate change is the solar variation that changes the global atmosphere gradually. Solar variation means emitting different amounts of radiation from the Sun. The amount of solar radiation depends on the sunspots driven by the Sun’s magnetism. Sunspots emit more heat from the Sun, and that makes the Earth warmer. They look like black holes that throw more solar radiation toward the planet compared to the natural part of the Sun. However, the solar variation and sunspots are related to the solar magnetic cycle or solar activities. Sunspots are also known as storms on the outside layer of the Sun.  It plays a critical role in ejecting solar gassy and flares from the Sun’s corona.
Although the temperature of the sunspot is lower than other parts of the Sun, the outer layer of the sunspots releases huge ultraviolet rays and throws them on the Earth’s surface. The number of sunspots reaches a peak during 11 years of solar activities- it is called the solar maximum. In the last century, many sunspots have been identified on the Sun simultaneously the Earth’s temperature increased. The sunspots and solar variations have raised the Earth’s temperature by about 0.1 degrees Celsius. The Sun has been brighter than 100 years ago due to the solar cycle activities driven by the sunspots, as the Earth has been warmer.

Volcanic eruptions mean emitting huge gas, flash, lava, rock, and dust from the planet’s surface. Volcano eruption is one of the most devastating natural disasters that change the environment of the disaster area. Therefore, it is another natural cause of climate change. The most adverse impact of the volcanic eruption is increasing the temperature of the Earth.  The lava emitted from volcanic eruptions can increase the surrounding area’s temperature by around 1200 degrees Celsius.

Does volcano eruption increase or decrease the Earth’s temperature?

According to Milankovitch Cycles, the Earth moves around the Sun, and it takes 365 days to complete around the Sun. Additionally, the Sun takes 24 hours to complete the rotation. Axial tilt is a crucial natural cause of climate change that receives more and less solar radiation based on the position. Axial tilt refers to the Earth’s angle between the orbital plane and the equatorial plane during rotation. It is also known as obliquity that represents the Earth’s angle. Axial tilt makes different seasons in the same area of the planet.

According to the statistic reports, the Earth has been tilted 23.5 degrees perpendicular to the plane. The axial tilt differs 22.1 and 24.5 degrees from its orbital plane around the Sun. The season of the Earth depends on the axial tilt; therefore, the more axial tilt angle, the greater seasons. The Sun provides more solar radiation when the Earth’s hemisphere tilts towards the Sun in the summer season. On the other hand, the Earth receives less solar radiation when the Earth tilts away from the Sun’s orbital plane. According to Milankovitch (1930), it takes 41,000 years to complete the ice age cycle. So, the ice age comes back after every 41,000 years.

For example, now the Earth is tilted 23.45; therefore, the one hemisphere receives more solar radiation that creates extreme summer on the Earth; simultaneously, another hemisphere gets extreme winter. The axial tilt is reducing; therefore, the Earth gets extremely hot in summer and cold in the winter seasons. Based on the discussion, it is optimal to say that the axial tilt causes climate change on the Earth.

Precession refers to the movement in the orientation of the rotational axis due to the gravitational force of the Sun and moon. It is a type of movement that occurs when it starts to wobble and change the direction of the first axis. The Earth rotates once every day that takes 24 hours. However, it wobbles slightly roughly after every 19 to 24 thousand years.  If it’s leaning towards the Sun, it gets more heat. On the other hand, the Earth gets less heat if it leans away from the Sun. The Earth’s precession affects climate change; hence, precession is another natural cause of climate change.

Eccentricity is also known as orbital eccentricity, describes how the Earth moves around the Sun. The Earth does not move the Sun in the same circular motion. Orbital eccentricity measures the variation of the orbital path from a perfect circular shape. It is also known as the orbital parameter that controls the amount of solar radiation received by the Earth. The variation of the orbital path affects the gap between the Sun and planet. It controls the lengths of the summer and winter seasons. According to statistic reports, the summer is approximately 4.5 days longer than winter due to the orbital eccentricity. It is all about the distance between the Sun and Earth. The Sun is positioned around 152.1 million kilometers from the Earth in summer, the farthest distance.
The Earth gets closer to the Sun during the winter seasons in the northern hemisphere. On the other hand, in the winter season, the distance between the Sun and Earth is 147.1 million kilometers, also known as the closest distance. NASA scientists have declared the current orbital eccentricity of Earth is e ≈ 0.01671. Now, the Earth orbits the Sun in an elliptical motion shape. It is slowly reducing the cycle of the 100,000 years. The Earth gets warmer when it rotates around the Sun in a circular orbit. In contrast, the Earth gets colder when its moves around the Sun in an elliptical orbit or eye shape. The discussion proves that orbital eccentricity is a significant natural cause of climate change.

The tectonic plates are the separated pieces of the Earth’s crust. The outer face of the crust is rocky and solid, and it differs into two types of materials, such as less-dense and the more-dense oceanic crust. These tectonic plates can move freely and cause Earthquakes and volcanoes on the Earth. Most ocean volcanoes and Earthquakes are the direct consequences of continental drift. The tectonic plate’s movement can be stipulated in four patterns: transform faulting, spreading, subduction, and collision.

For example, the collision between the Indian and Eurasian plates has extended the Himalayan Mountains range. Magma is created from the molten rock below the crust emitted from volcano vents that change the climate. In sum, continental drift by plate tectonics is a natural cause of climate change.

The ocean current is the natural cause of climate change on the Earth formed from the continuous movement of the ocean water. It is generated from the ocean wind, gravitation of the moon, breaking waves, temperature, and rotation of the Earth. The ocean current plays a crucial role in causing climate change by warming the Earth. Most solar radiation is absorbed by the ocean, although land areas receive some radiation. The land area returns some heat into space after sunset. However, the sea retains solar radiation and finally spreads them around the planet. The heat evaporates the ocean waters continuously, raising the temperature and humidity of surrounding areas on Earth. Ultimately, the evaporation process creates rain and storms that reduce the temperatures. 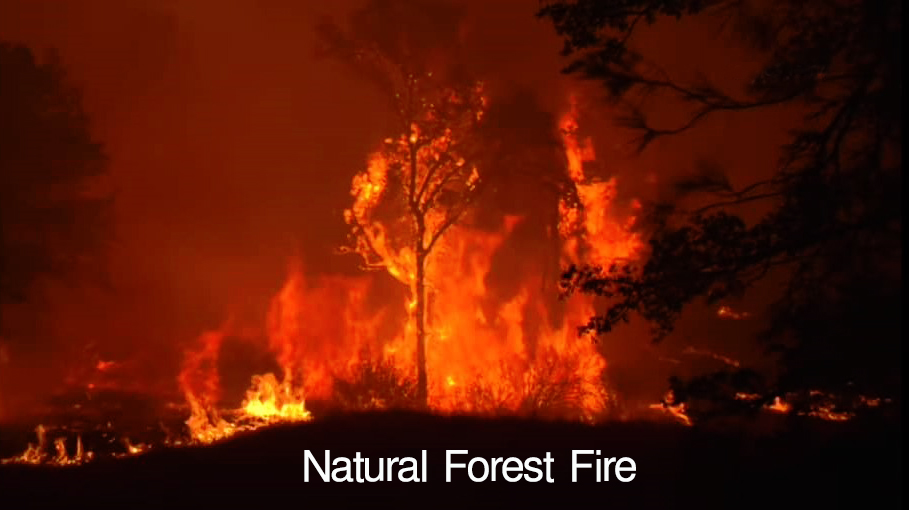 Natural forest fires can spark from lightning and drought that set fire on trees. Usually, warm temperatures encourage setting the fire, and strong wind spread the fires surrounding areas rapidly.  Forest fire transforms green vegetation into the desert for a period of time.

Greenhouse gases refer to the gases that change the climate by trapping infrared radiation or heat in the atmosphere. GHG is the short form or abbreviation of greenhouse gases. There are two types of reasons for producing greenhouse gases: natural causes and human-induced causes to produce greenhouse gases. Natural greenhouses gases are produced naturally on the Earth without people’s activities. For example, permafrost is a frozen ground that contains and releases greenhouse gases such as carbon dioxide (CO2) and methane (CH4) naturally.

What are the natural causes of climate change pdf?