The Importance of Technology Adoption Models

Technology adoption models answer the most common question, “why do people use the new technology?”. In addition, the researchers and practitioners present factors that influence people to accept new technology. Technology has become an inevitable part of daily life. For example, in the COVID-19 pandemic, students have conducted virtual classes through online meeting platforms such as Google Meet, Zoom Meeting, Microsoft Team, and Skype. Additionally, many organizations have handled corporate meetings via these web conferencing applications. They have also generated virtual meeting minutes and submitted them by the technological tool. The technology adoption models are developed in order to propose the reasons and consequences of using the technology.

The Models of Technology Adoption are:

These are examples of technology adoption models and theories.

Fred D. Davis is a professor at the University of Michigan School of Business Administration. His research interests include user acceptance of technology, technology support to make decisions, and motivational factors of computer acceptance. TAM model was certainly derivated from the adoption Theory of Reasoned Action (TRA), which describes the factors that stimulate people to change human behavior. It has also been designated as the most cited model in the field of information and communication technology(ICT). The technology acceptance model(TAM) is certainly one of the most significant technologies adoption models.

The Final Version of the Technology Acceptance Model was developed by Venkatesh and Davis in 1996. The Technology Acceptance Model (TAM) explains the user’s intention to accept technology by three variables: perceived usefulness, ease of use, and attitude toward use. The additional factors of the TAM are user education, system features, user participation in the design, and the nature of the execution method. However, it excludes the social influence factor on the acceptance of modern technology. So, the researchers and practitioners term it as the limitation of the model for being implemented beyond the workplace.

However, In 1996, Viswanath Venkatesh and Fred D. Davis included an additional variable, “External Variables”, to the previous model and outlined the final version of the Technology Acceptance Model.

“The TAM, TAM2, ETAM, TAM3 and UTAUT have been used over the years by various researchers to explain the adoption technology systems”. The three social influence determinants are subjective norm, voluntariness, and image. Additionally, the four cognitive instrumental processes of perceived usefulness are Job relevance, Output quality, Result demonstrability, and Perceived ease of use. Both social influence and cognitive instrumental determinants stimulate users to accept and use the system.

3. Unified Theory of Acceptance and Use of Technology (UTAUT) (2003)

Viswanath Venkatesh, Michael G. Morris, Gordon B. Davis, and Fred D. Davis established the Unified Theory of Acceptance and Use of Technology (UTAUT) in 2003, under the title of the “User Acceptance of Information Technology: Toward a Unified View”. Technology Acceptance Model (TAM3) was introduced by Venkatesh and Bala in 2008. TAM-3 provides valuable rational explanations of how and why individuals make a decision about the adoption and use of ITs, particularly the work on the determinants of perceived usefulness and perceived ease of use.

5. Extending Unified Theory of Acceptance and Use of Technology (UTAUT2) (2012)

The Motivational Model of Microcomputer Usage was introduced by Magid Igbaria, Saroj Parasuraman, and Jack J. Baroudi in 1996. It is also known as Igbaria’s model.

Katz, Blumler, and Gurevitch established the uses and gratifications theory in 1974. It explains why people utilize certain kinds of communication media. It also describes the gratification of the people using these media compared to others. The U & G theory explains why people utilize certain media and what benefits they get from it. The U&G theory includes three constructs; motivations, behavioral usage, and gratifications/ satisfaction.

The five elements of the diffusion of innovation theory are Innovators, Early Adopters, Early Majority, Late Majority, and Laggards.

Thompson, Higgins, and Howell established the Model of PC Utilization (MPCU) in 1991. They extended Triandis’ model to explain PC utilization attitudes. The  Model of PC utilization describes six elements of personal computer utilization such as job fit, complexity, long-term consequences, affect towards use, social factors, facilitating conditions, and experience in order to predict PC utilization behavior. However, it differs from the Theory of Reasoned Action as it differentiates between cognitive and affective elements of attitudes. 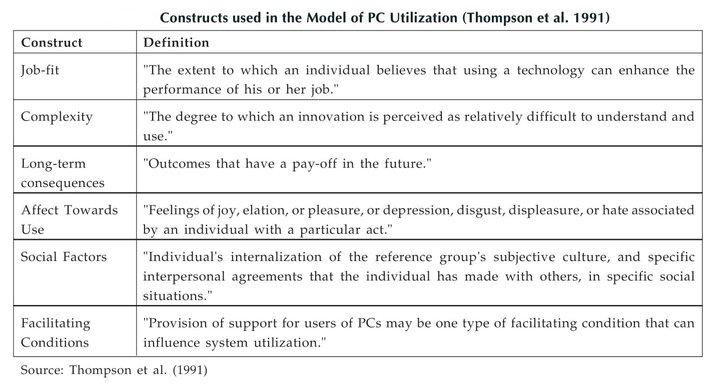