This model generates rank for each country through contained scores on a specific dimension. Each dimension of the Hofstede model is different from other dimensions for its unique factor analysis. Hence, it is one of the critical theories to understand the cultural differences prevalent across the country. Cultural difference creates cultural conflict that is also known as the communication noise barrier.

Geert Hofstede’s 6 Cultural Dimensions are Power Distance Index (PDI), Individualism Vs Collectivism, Masculinity Vs Femininity, Uncertainty Avoidance Index (UAI), Long Vs Short Term Orientation, and Indulgence Vs Restraint. This cultural dimensions theory is beneficial to understand and change the work attitude of the organization, group, team members, and so on. It also assists the negotiators to understand the opposite party during international negotiation. Hofstede’s cultural dimensions are a significant model of communication that contributes to international and cross-culture communication.

(Extent of Inequality and Power Distributed in Society)

The high power distance refers to the society where less powerful people easily accept the unequal power distribution in the community. It means the acceptance of the inequity between high- and low-status members in society. People in High PDI expect that power will be distributed in society unequally, so they do not complain about inequality. It has become a tradition that they convey from generation to generation. They value traditional norms and social rules. Therefore, people in high power distance countries accept the inequity in organization smoothly.

Hofstede country comparison website: www.hofstede-insights.com. Anyone can compare the country’s culture through the following link. 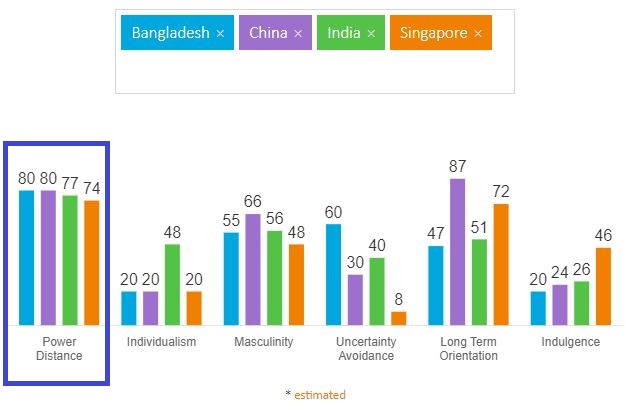 Low power distance refers to the culture where less powerful people do not accept unequal power distribution in society easily. It means the acceptance of equity and equality between high- and low-status members in society. The member of the community practice fairness and interdependence activities in society. People in a low PDI society are pragmatic; hence, they are less orientated to traditional values. They also complain about the subsist inequity between high- and low-status members in communities and organizations.

Austria, Israel, Denmark, New Zealand, Norway, Germany, and United Kingdom are examples of low power distance countries in 2022. According to Hofstede’s cultural dimensions theory, Austria has achieved the lowest PDI country with 11, following Israel with 13, Denmark with 18, New Zealand with 22, Norway with 31, Germany with 35, and United Kingdom with 35. People from these countries do not accept the inequity between high and low influential people in society, community, and organization. They raise voices against injustice and discrimination in society. 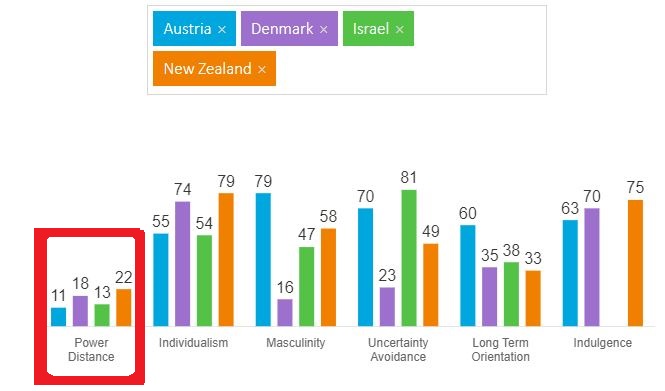 (Prefer To Work Independently or Interdependently)

Individualism and collectivism are the most significant cultural dimensions that separate the society where people prefer to work personally or interdependently. According to Hofstede’s model, the high score of the country indicates individualistic culture. On the other hand, the low score indicates collectivistic culture. Hofstede’s cultural dimensions theory encourages collectivistic culture; so, the members of an individualistic society should understand that they are part of a larger group. Therefore, they should pay all-out efforts to achieve a shared goal. Tuckman’s theory of communication discusses more on how to work together in a group to achieve common goals.

Usually, individualist cultures are prevalent in western countries. For example, the United States, Australia, United Kingdom, Canada, Netherland, New Zealand, and Ireland are individualistic countries. According to Hofstede’s Dimensions of National Culture, the  United States scores 91, following Australia with 90, the United Kingdom with 89, Canada with 80, Netherland with 80, New Zealand with 79, and Ireland with 70. Therefore, people from these countries prefer to work alone and foster independent achievement. 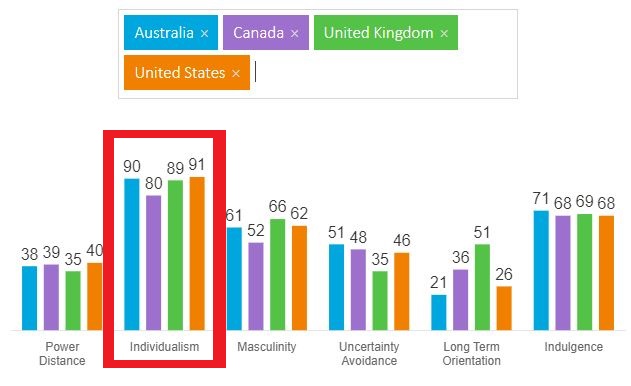 Collectivism refers to the collectivistic culture of the society where people prefer to work together and foster interdependent achievement. Collectivist members like to work in groups and try to help each other. They prefer to work in groups instead of working alone. In this culture, relationship prevails over the task in the business setting. They also emphasize group identity and group success. Hence, they are cooperative, obedient, and self-sacrificing. The family member maintains strong relationships with members in collectivism. On the other hand, family members do not focus on maintaining strong relationships in an individualistic society.

Collectivist cultures are common in Asian and Latin American countries. Guatemala, Ecuador,  Venezuela, Indonesia, Pakistan, Taiwan, South Korea, China, Bangladesh, and Malaysia are considered the most collectivistic nations globally. According to Hofstede’s cultural dimensions model, the low score in this dimension indicates a collectivistic society. For example, Guatemala has ranked the most collectivistic country in the world with a score of 06, following Ecuador with 08, Venezuela with 12, Indonesia with 14, Pakistan with 14, Taiwan with 17, South Korea with 18, China with 20, Bangladesh with 20, and Malaysia with 26. So, people from these countries prefer to work in groups and intend to achieve shared goals. 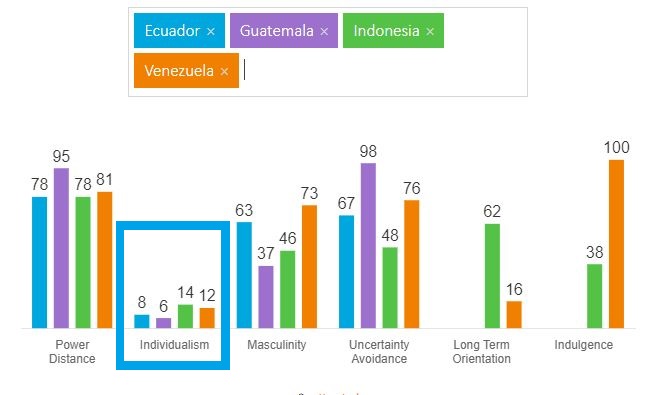 Differences Between Individualistic and Collectivistic Culture

Masculinity versus femininity is another dimension of Hofstede’s theory that differentiates society based on gender roles and traits. The high score of the dimension refers to the masculine culture driven by competition and material success. On the other hand, the low score indicates a feminine society driven by the quality of life.

In business circumstances, masculinity versus femininity refers to as “tough versus tender” cultures.

Masculinity pertains to traits associated with assertiveness culture in society. According to Geert Hofstede’s cultural dimensions, men focus on personal tasks and material success in masculine culture. Gender roles are differentiated and, the role of men and women overlap less than feminine society. The men are more assertive, decisive, dominant, and focused on success. On the other hand, the women are more humble, loving, and focused on the quality of life. In this society, men concentrate on assertiveness, heroism, and performance. The men of these societies are more competitive than feminine societies. Children in China learn the importance of personal achievement since childhood. So, they compete with each other for self success.

In business settings, masculinity refers to the rough culture in the organization. The Boss does less discussion with employees to a make- decision.

Slovakia, Japan, Hungary, Austria, Venezuela, Italy, Mexico, and China are considered masculine countries for their high score in this dimension. For example, Slovakia scores 100, following Japan(95), Hungary(88), Austria (79), Venezuela (73), Italy with 70, Mexico (69), and China (66). So, the gender role of these countries is specific and overlap very little.

Femininity denotes traits associated with nurture culture in society. The members of feminine society focus on relationships and quality of life. They are nurtured, cooperative, modest, and caring to other members of society. They also maintain modest behavior in the community and organization.

In the business context, femininity refers to the tender culture in the organization. The Boss does great discussion and intuitive analysis to make decisions.

Sweden, Norway, Netherland, Denmark, Costa Rica, and Finland are considered as the most feminine countries in the world for their low MAS score in this dimension. According to Hofstede’s cultural dimensions theory, Sweden ranked the most feminine country in the world with a score of 5, following Norway (8), Netherland (14), Denmark (16), Costa Rica (21), and Finland (26). So, the gender role of these countries is fluid that overlaps significantly.

(Extent of Comfort in Uncertain Situations)

Greece, Guatemala, Russia, Portugal, Belgium, and Japan are considered as the high uncertain avoidance countries. According to Hofstede’s cultural dimensions theory, Greece has become the highest uncertainty avoidance country with a score of 100, following Guatemala (98), Russia (95), Portugal(95), Belgium(94), and Japan(92). So, people from these countries prefer to lead a planned life to avoid unwanted risks.

People in low uncertainty avoidance society are comfortable with undesirable moments. They mainly act first before garnering enough information. They are not intended to follow all rules and regulations thoroughly; so, they work to reduce the unnecessary rules from the society and organization. People in low UAI countries are relaxed and open-minded; therefore, they do not scare to encounter uncertainty and unpredictability.

Singapore (8), Jamaica(13), Denmark(23) and Hongkong(29), Sweden (29), and also Malaysia 36 are examples of low uncertainty avoidance countries. People from these low UAI countries accept the risk easily and do not scared to encounter unwanted situations.

Long versus short term orientation is a crucial dimension of the Geert Hofstede theory that categorize society based on pragmatic and normative actions. Michael Harris Bond added this dimension in 1988. It assists to measures the tendency of long term or short term results. It also describes how people deal with the past, present and future.

People in long-term orientation are focused on the future consider it more valuable than the past. They tend to spend huge time to achieve long-term results. The members in the long-term orientated society are practical, modest, and more careful. They also encourage others to utilize time and money properly to achieve the goal.

According to Hofstede’s cultural dimensions theory, South Korea(100), Taiwan(93), Japan (88), China(87), Germany(83), and Singapore(72) are the long-term orientation countries in the world. So, people from these countries set long-term goals and expect perseverance satisfaction.

People in short-term orientation are focused on the past and the present, considering them more valuable than the future. They prefer to enjoy the current situation regardless of the future goal. The members in the short-term orientated society are spiritual, normative, and nationalistic.

According to Hofstede’s cultural dimensions model, Ghana(4), Nigeria(13), Australia(21), United States(26), Philippines(27), and also Norway(35) are considered as the short-term oriented countries in the world. So, people from these countries set short-term goals and expect immediate satisfaction.

Indulgent versus restraint stands for cultures that allow people to enjoy or suppress gratification. In the 21st century, Michael Minkov described the six dimensions and extended the Hofstede theory.

Indulgence refers to a society where a higher percentage of people acknowledge that they are leading a happy life. People in an indulgent society enjoy life freely; hence, they have fun and obtain optimistic attitudes. They certainly prioritize having friends, playing games, and spending leisure time appropriately.

Restraint refers to a society where a smaller percentage of people declare that they are leading a happy life. People in a restrained society suppress gratification and do not focus on the freedom of speech. Additionally, they regulate life by the traditional norms and have pessimistic attitudes.

Differences Between Indulgent and Restrained Societies

The two additional dimensions of global cultural differences are high context versus low context and monochronic versus polychronic time. In 1976, Edward T. Hall introduced these cultural dimensions that differentiate one from another nation.

Monochronic: Monochronic members focus on one task at a time and work hard to meet deadlines. They also adhere to plans, schedules, and deadlines because time is valuable. For example, people in North America and Northern Europe are mostly monochronic.

Polychronic: Polychronic members are frequently late, do many things at once, are easily distracted, and tolerate interruptions. Additionally, they are not obsessed with promptness or schedules because time is not highly valued. For example, people in Kenya, Argentina, African Americans, and Asia are polychronic. The monochronic versus polychronic time is an example of chronemics nonverbal communication.

Culture is a set of values, beliefs, attitudes, behaviors, symbols, and norms shared by people in a society or community. The cultures vary from country to country and community to community. For example, Malaysian culture is not similar to Australian culture. Additionally, the culture of African Americans is not identical to White Americans.