A real-life example of group communication is group study. For example, few students regularly sit together to discuss how to complete the assignments given by the lecturers. The group members meet together before or after the class to share their opinion and suggestion. They continue their discussion until the project is completed. So, the continuous interaction among a group of students for the assignment completion is an example of group discussion.

The most common example of group discussion is virtual group communication. Nowadays, educational institutes offer a virtual learning system due to the COVID-19 pandemic. It allows connecting students far from each other beyond the geographical borders. To complete the group assignment, the students create a virtual group to communicate through virtual meeting platforms such as zoom, Google meet, Skype, and so more. They communicate regularly to complete the assignment and presentation. Many lecturers instruct their students to submit the virtual meeting minutes sample.

The 5 Elements of Group Communication are: 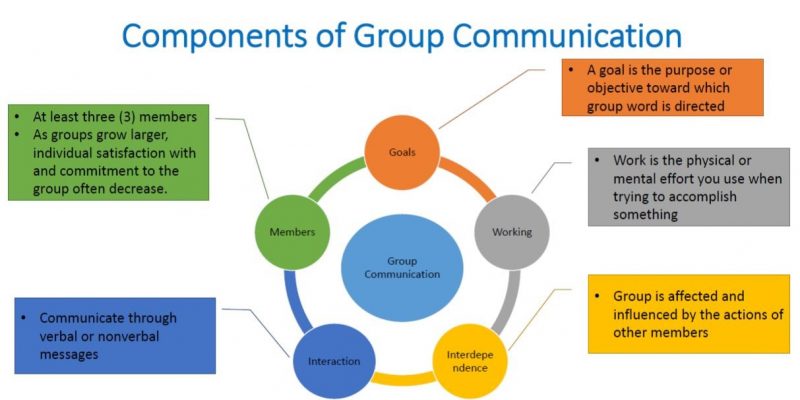 Members are another essential element or component of the group. At least three (3) members can form a small group, and 18 is the maximum number. As groups grow larger, individual satisfaction with and commitment to the group often decrease. A Group can not be formed without members, so every group must consist of some members. Members are the most important to form groups; hence they have to follow some ethical principles in group communication.

A social loafer refers to a person who makes a minimal contribution to the group and assumes the other members will take up the slack—the willingness of every group member to be a participant. The group member should be collaborative, cohesive behavior, but not social lofting. Learning effective communication in groups is about what you can do in groups and what you should do.

Group is affected and influenced by the action of other members. Therefore, interdependence is an essential component of group communication to motivate team or group members.

Work is the physical or mental effort you use when trying to accomplish something. It is also one of the essential elements of group communication in which the group goes ahead.

Barriers in Group Communication are disturbances that are obstacles to interactive communication among group members. The barrier in group discussion usually hiders to understand other members in the group or team. The group discussion has many stages, tensions, conflicts, and so more. According to Tuckman’s model, the five stages of group discussion are Forming, Storming, Norming, Performing, and Adjourning. Members must need to overcome all these stages to achieve the independent and interdependent goal. The four types of barriers in group communication are Ethnocentrism, Stereotyping, Prejudice, and Discrimination.

The 4 Types of Barrier in Group Communication

Ethnocentrism refers to a mistaken belief that your culture is superior to others, with special rights and privileges that are or should be denied to others. It is not about patriotism or pride.  Ethnocentrism is an excellent barrier that obstacle to effective communication among the group or team members.

For example, my culture should be a role model for other cultures. People would be happier if they lived like people in my culture.

Stereotyping means generalization about a group of people that oversimplifies their characteristics. It relies on exaggerated beliefs to make judgments about a group of people. For example, Malays are lazy; Chinese are greedy and rich; Indians are drunker; Singaporeans are “kiasu”. Negative traits to an entire group when, in reality, only a few people in that group may possess those traits. In another instance, Asian students are good at Mathematics(Positive stereotypes).

Prejudice refers to the negative attitudes about other people that are based on faulty and inflexible stereotypes. Prejudice mostly brings negative consequences. For example, “He cannot be brilliant if he only has a Bachelor’s degree from XX University or College. In addition, “I don’t want a person with disabilities working on our group project.”

Difference Between Group and Team Communication

According to our research data, the group and team describe almost the same characteristics, although they contrast.

Group discussion occurs when a group of people regularly interact to achieve a common goal.

Francis and Young (1992) defined a Team as a “high-performing task group whose members are actively interdependent and share common performance objectives. A group of members (people) shows closer cooperation and cohesiveness likewise a group.

Players come together to win the match. Here, winning the game is the common goal, and players are team members similar to the group.