Travelogue article refers to the feature story that describes the explanation of traveling guidelines for the journey. It is also known as a travel feature in journalism. Journalists write travelogue articles to inform others about the tourist spots. The seven types of feature articles are profile, how-to, review, and travelogue feature articles. It is one of the crucial types of feature in journalism articles for recreation and entertainment. People travel for various perspectives such as personal business, job purpose, multicultural immigration, curiosity, and adventure.

The ten elements of an ideal travelogue article are 1. Analyze or visit the place, 2. Write the article descriptively, 3. Explain the transportation and mention how to go there, 4. Discuss the hotel and motel, 5. Review the cultural and traditional background, 6. Explain the historical and famous locations, 7. Discuss the food and restaurant, 8. Notify the weather and atmosphere, 9. Report the shopping mall, 10. Mention Some Dos and Don’ts of the place.

Tour To Tokyo, Japan: The Place of Peace

Tokyo is the most beautiful and peaceful capital city in Japan, where every tourist wants to enjoy its breathtaking nature, historical buildings, delicious food, and traditional paces. A rumor, I had heard that traveling to Tokyo is very expensive. My tour to Japan has discovered an ample travel guide to visit Japan on a cheap budget that will help every tripper who is craving to see the beauty of Tokyo.

I planned to visit Japan from Malaysia, as I have stayed here since 2016. In 2018, I got an opportunity to participate in an international conference held by the University Tsukuba in Tokyo, Japan. As my first step, I tried to book an air ticket at a low price because my budget was average. Most of the airline ticket price was expensive, which made me a little bit worried. Then I realized that Air Asia offers cheap plane tickets with limited baggage. I have no extra baggage, so I can accept this opportunity. Luckily I managed to book a two-way ticket at a low price.

After nine hours of journey, when the plane reached Haneda Airport, I became amused to see Japan’s beauty. Tokyo is both the economic and political center of the country. It is one of the most populous capital cities globally, and the total population is around 37.4 million. This beautiful city has become the host of many international programs and events, for example, three G7 Summits and the Summer Olympics in 1 64. The airport, decorated with digital posters and banners, declared it would be the host of the 2020 Summer Olympics.

Japanese are very kind, humble, helpful, and polite. I perceived this during the conversation and asked for help from them. I thought about how these Japanese people indulged in the second world war. There is no country in the world immune from st stereotypes. I was very confused about Japanese people until visiting Tokyo, and my confusion faded away when I spent five days here. According to my pre-planned, I decided to stay with my friend instead of a hotel. He lives in the Akabane area; it is around 30 kilometers far from the Haneda International airport. So, I was looking for a station where could get the train to go to Akabane. I asked a Japanese police officer to help me find the train station that takes me there.

I became amused to see his hospitability; because he had taken me to the exact location where I could get the train. He also paid money for my ticker because of not have the Japanese currency. The tickets cost ¥1400, and the journey takes 5  minutes. Finally, he bowed to exchange greetings when saying good ye to me. It is a tradition in Japan to bow while exchanging greetings.

I caught the last train from Haneda Airport Terminal 3 Train Station, and after 55 minutes, I arrived at Akabane station at 11:45 AM. My friend was waiting for me outside of the station, wearing an anti-cold jacket, which amused me. I felt freezing whenever I came out of the station; because this area was not under air- conditioning. Instantly, I got out my jacket from my baggage and put it on to protect myself from bitterly cold weather. I am always afraid of the cold, but I enjoy the cold weather in Japan.

It was three minutes’ walking distance from my friend’s house, so we started to walk, and finally, we reached our destination at 12:30 PM. It was the second time I became astonished that my friend did not lock his house. For my curiosity, I asked him why not lock his house when getting outside. He replied that there is a rare house robbery incident in Japan, even though you leave your houses without locking them. 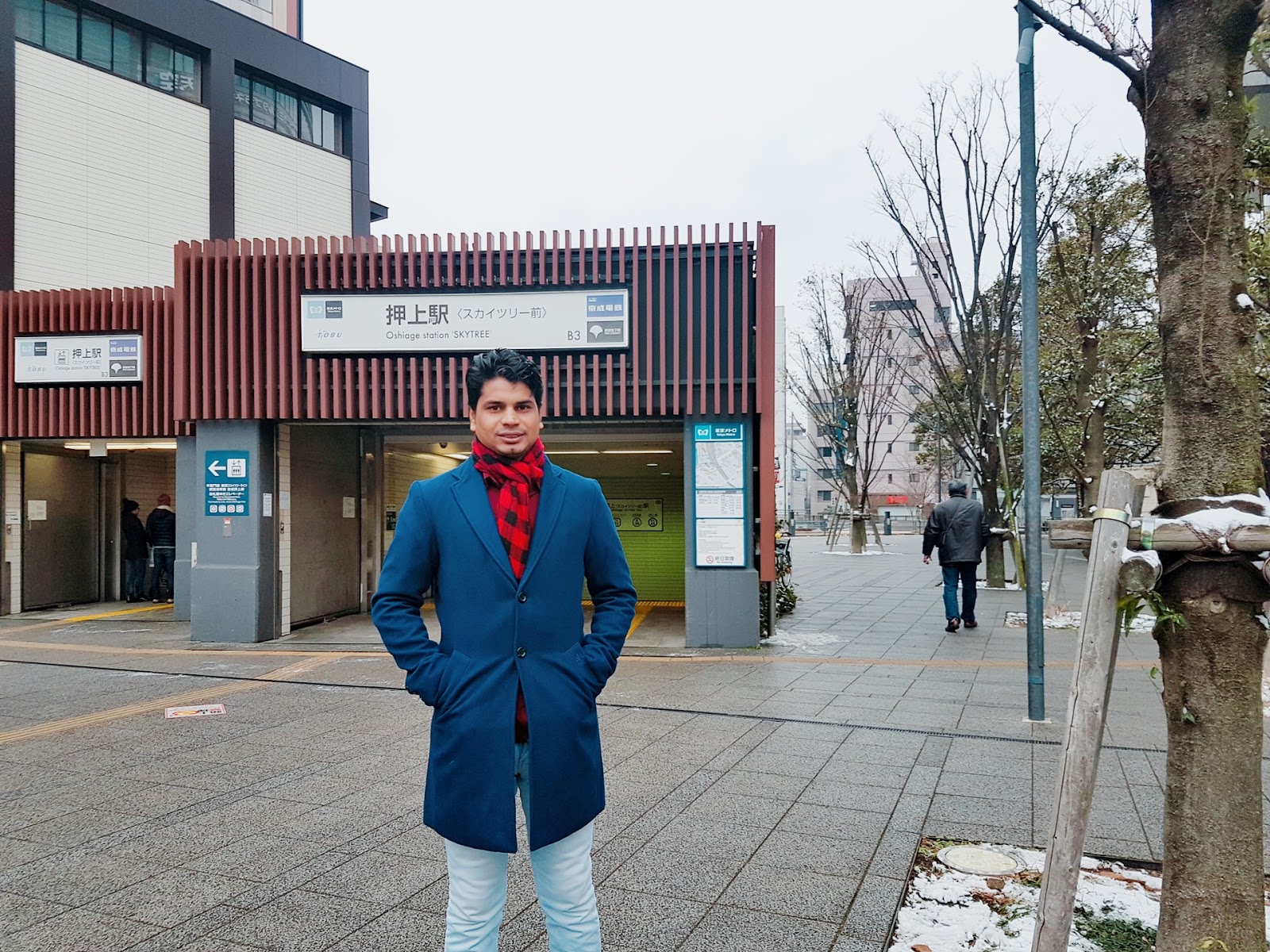 The following day, I woke up very early to get ready and participate in a conference held by the University of Tsukuba. This is the first time I have fallen in love with the beauty of Japan to see the fantastic weather. It was freezing weather with windy and falling snow. This is my first experience of seeing falling snow in my life. I had a dream of experiencing this kind of atmosphere that I had only seen in the cinema.

My dreams came true through the Japan tour. It is my habit to capture photos; therefore, I grabbed some photos inside and outside the station. Now I know how to purchase a ticket at the ticket machine that the Japanese police officer taught me yesterday night. I bought my ticket to get to the University of Tsukuba.

I joined the APEC- Tsukuba International Conference XIII, and they offered a buffet lunch for all participants.  There was no doubt that this conference paved the new way for me to be connected with academic life in the future. The university appointed a few guides to ease our movements in new places. The guide took us to a restaurant to have lunch. It was my first opportunity to test Japanese food. I thought I would not feel comfortable eating Japanese food when I  saw them on the table. My concept turned reverse when I tried them. These foods were very delicious, and everyone enjoyed them.

Most of the food items were preferable to me, except raw eggs. Japanese restaurant provides raw eggs to eat, and many Japanese and foreigner eat them.  I stopped eating in the meantime, having lunch to think whether the foods were halal or not. I asked the guide for confirmation, and he replied that these foods are perfectly halal. He also said that all restaurants in Japan are not halal, so Muslims should be more aware of having food in a Japanese restaurant.

The obesity rate in Japan is higher than in other countries; therefore, they set different prices for the same food for lunch and dinner. Usually, they set the dinner food price higher to discourage people from having heavy food at night. 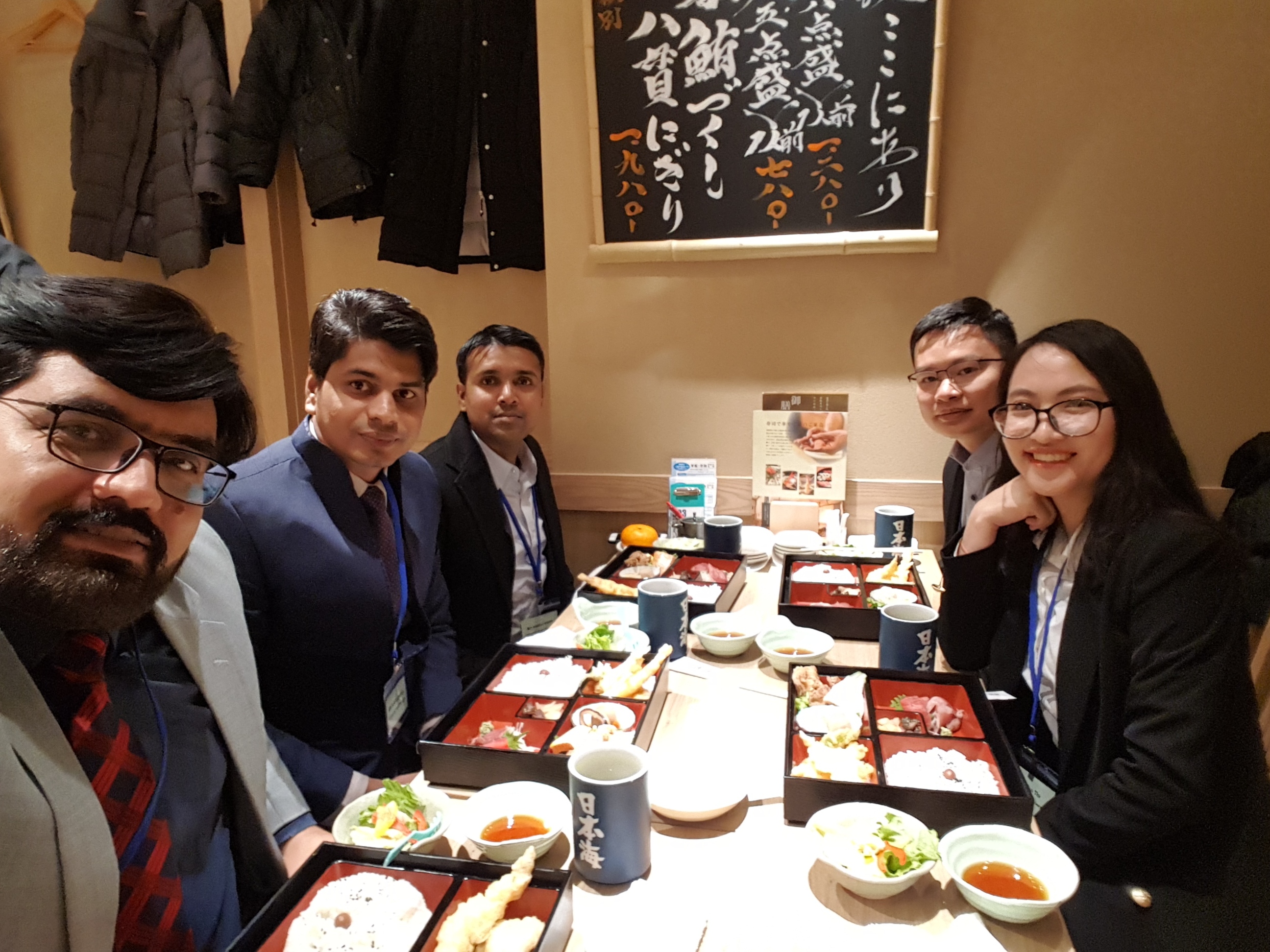 The gift-giving etiquette is another ritualistic and meaningful custom in Japan. They offer gifts on many occasions; for example, they provide many traditional gifts for all participants at the conference. Nobody can deny the cordial hospitality offered by the University of Tsukuba. Along with me, all participants from diverse countries became glad to them and praised them. They are treating us very politely. I became confused several times when I thought about how they attacked Pearl Harbor in 1941 upon the United States. In my opinion, Tokyo is the most secure and peaceful capital in the world for living without the hassle.

I decided to take a rest for the third day because of having extremely tiredness. Luckily my friend managed to approve his two holidays to give me more time. We spent the whole day together inside the house gossiping, cooking, and eating. In addition, we planned to roam around Tokyo the next day. I have to go back to Malaysia in two days, so I need to make a proper plan to see all the best places in Tokyo within two days. We divided Tokyo city into two zones for visiting them in two days.

On the fourth day, I and my friend followed the train to visit SKYTREE, also the tallest tower in Japan, loc ted in Sumida, Tokyo. It costs only JP¥450 and takes around 30 minutes from Akabane station to Oshiage Station (SKYTREE) but needs to change the platform two times. Since 2011, it has been the tallest structure in Japan, extending its height of 634.0 meters and making it the second tallest tower and structure globally, after the Canton Tower and the Burj Khalifa. The primary objective of using this tower is broadcasting; for example, they use it for TV signals and radio waves for national broadcaster NHK and a few numbers TV channels.

Every day they allow only 10,000 tourists to visit the sky tree. The ticket option is divided into three types such as combo ticket, Tembo gallery, and Tembo deck. The price of the tickets is around JP¥10 00 for all three tiers. Tourists can visit only one or two or all three decks. My excitement got palpable when I was lifted to the top floor of the Sky Tree. We had visited all three tiers—the appearance of the tower changes with changes in the color of light.

I feel that my tour to Japan was successful when I saw the whole of Tokyo city from the Tembo deck and the top floor of the tower. It was an excellent feeling to view the entire city from the top floor at night. After all, I did not forget to buy some souvenirs from the observation levels of Tokyo Sky Tree; it made my journey more compelling. 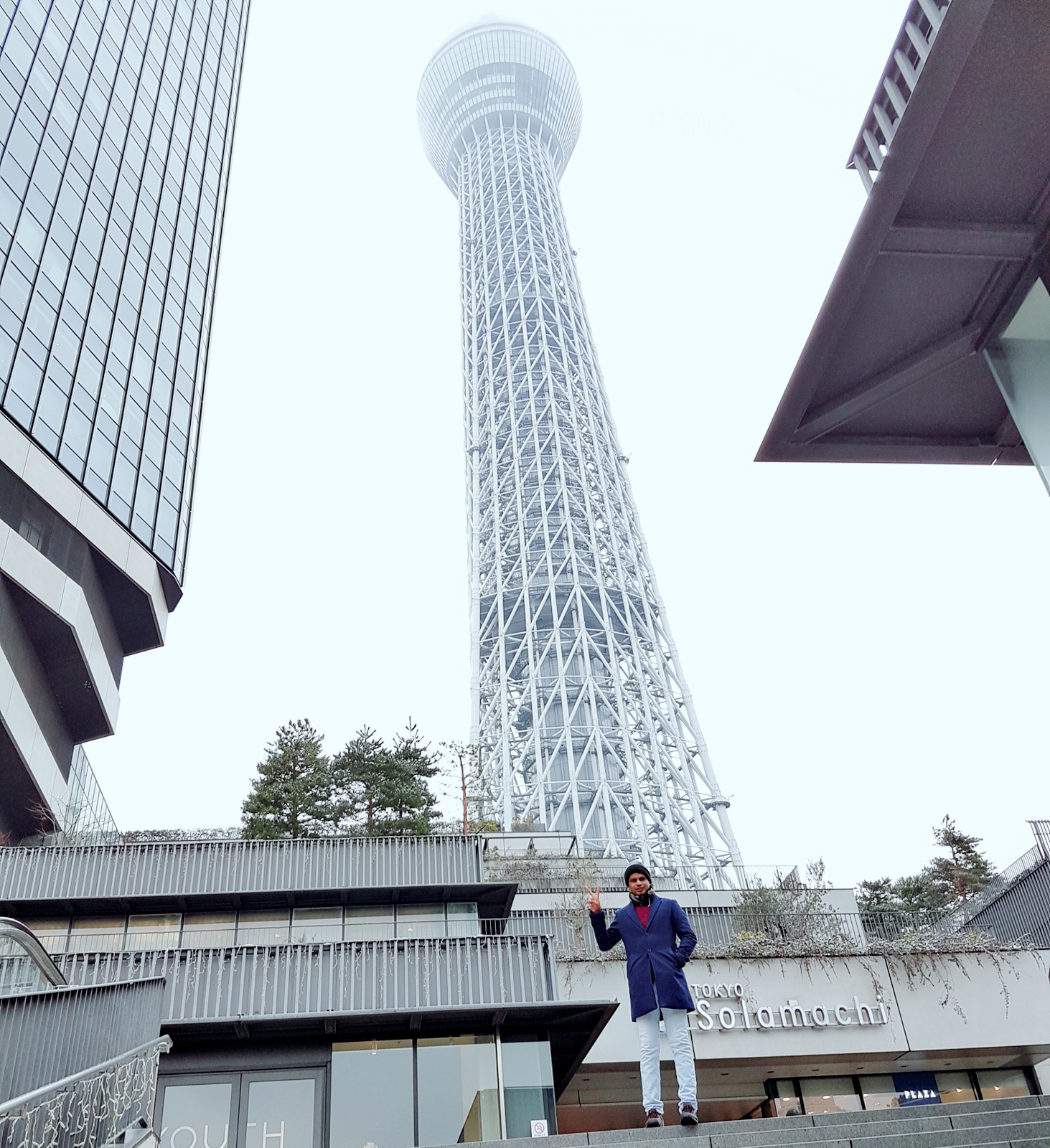 Figure 4: The Main Entrance of the Tokyo Skytree

Good time flies so fast. It was challenging to realize that I had spent five days here. My returning flight schedule was at night; I made it to utilize the who e day sightseeing. On my fifth and final day in Japan, I visited many historical and traditional places, such as the Imperial Palace, the Sensō-Ji Temple, the National Museum of Nature and Science, and Ueno Park and Zoo. In addition, I tested Japanese street food; although these are a little bit expensive, some foods cost cheap.

There are many places where you can buy souvenirs, gifts, and food cheaply. I purchased some pens, gift items, and great souvenirs in Asakusa on Nakam street. It’s a great street to visit and walk along on your path to see the traditional temple, and along the walk, you can buy snacks, conventional gifts like kimonos and sandals, jewelry, the phone ca es, bags, and hats. Japanese people are well organized into a hierarchy, and they always respect the senior people in every sector. Traditionally, seniority acted as the prime qualification for ho ding a higher rank. I had noticed that many juniors left their seat for senior citizens when I traveled on the train.

In short, Tokyo is not an ordinary place that I forget easily. According to Japanese “architect Tadao Ando “Look at London or Paris:  they are filthy. You don’t get that in Tokyo. The proud residents look after their city.” Traveling to Tokyo was not only a tour, but also it was an experience that I earned properly. I can forget my tour but cannot forget my experiences. So, if you love traveling, you will love Tokyo!

Travelogue Article Samples of the Newspaper

This is an example of a travelogue article for Students & a travelogue sample that will help students expand their knowledge. We really appreciate your comment and suggestions.